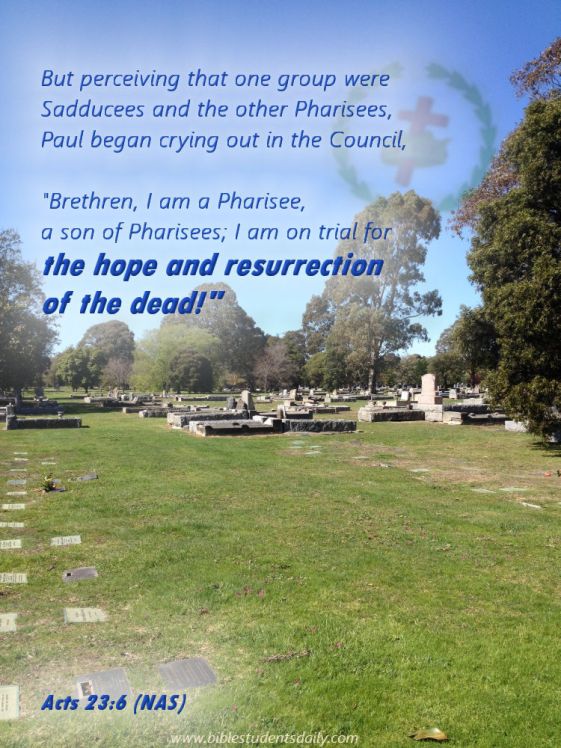 What is the Good News of the Bible all about?  One 5-letter word,  JESUS!

It is this good news about Jesus, that Philip explained about to the Ethiopian eunuch whom he was sent to minister unto (possibly by a vision or a dream), and to whom he explained the passage of Isaiah 35 (which the eunuch had been reading on his way home from Jerusalem).

“(34) And the eunuch said to Philip, ‘About whom, I ask you, does the prophet say this, about himself or about someone else?’ (35) Then Philip opened his mouth, and beginning with this Scripture he told him the good news about Jesus” (Acts 8:34,35).

Philip baptized the eunuch while on the road that went from Jerusalem to Gaza, before being suddenly taken away by “the Spirit of the Lord,” and the eunuch did not see his again, but went on his way rejoicing (Acts 8:36-39).

What is Jesus all about?

Jesus is all about the “repentance and forgiveness of sin”—these being the exact words of Apostle Peter “and the other Apostles” as documented by Luke in Acts 5:30-31 when they had been summed to stand before the High Court officials of the Sanhedrin and were questioned by the High priest (who was Caiphas at that time—John 18:24) about why they were not obeying the strict orders given of not to “teach in this (Jesus’) name” (Acts 5:28).

Jesus is also all about the hope and resurrection of the dead.

Let us explain this by taking a look at the Apostle Paul’s experiences and words:-

When the commander in Rome was made aware by the Apostle Paul himself that Paul was a Roman citizen, he summoned Paul to stand before the chief priests and all the Sanhedrin (comprised of Pharisees and Sadducees) to find out why Paul had been accused and flogged by the Jews the day before. Then after stating to the Sanhedrin that he had “fulfilled his duty to God in all good conscience to this day” he was hit in the mouth by those standing near him in the crowd, as ordered by Ananias, (Acts 23:1-3)—who was the Father-in-law of Caiaphas (the High Priest) and had also been a high priest himself, hence still carried this title and still had his opinion count heavily amongst the Sanhedrin.

And now, perceiving that no speech of his could affect his hearers, the Apostle Paul “cried out,” “Men and brethren, I am a Pharisee, the son of a Pharisee: of the hope and resurrection of the dead I am called in question” (Acts 23:6).

It was not just the Apostle Paul who taught about this glorious doctrine of hope, as we read in Acts 4:2. Other Apostles such as Peter and John also “taught the people and preached in Jesus the resurrection from the dead.” This “greatly disturbed” the priests, the temple guard and the Sadducees (Acts 4:1).

Do we likewise share the good news about the resurrection to those around us?

Do we help people recognize God’s loving and merciful character helping destroy the false beliefs of a God who would eternally punish and send his creation to a place of burning hell fire to be tortured for eternity or purgatory (which is not even a word in the Bible)?

When was the last time we explained to someone:

Are we also, today, “prisoners in the chains of Christ”… (mentally perhaps) because of  boldly sharing what is Godly truth because it is too glorious to keep just for oneself? (Acts 17:32)

Do not worry that you are mocked!

This is what the sufferings of Christ are all about and those who suffer for righteousness sake, are blessed “for our light affliction, which is but for a moment, worketh for us a far more exceeding and eternal weight of glory” (2 Corinthains 4:17).

How gloriously logical these words are, and give sense to the questioning mind and thus provide hope and comfort that, “If there be no resurrection of the dead, then they that are fallen asleep in Christ are perished” (1 Corinthians 15:13, 18).

Like the early Christians, we too, are scattered all over the world and either alone or in small groups of two or three we preach Jesus and the resurrection.

Let us tell the world
there is a better day coming!

Let us tell others that there is coming a time when there shall be no more death or dying but a resurrection from the dead that will ultimately bring mankind back from the dead!

Armageddon is actually a great thing, coming and here is why…

It is a sifting out and cleansing process … it is how the world is to be bleached out from all unrighteousness and the JUDGEMENT OF GOD has begun with His Own house—the Church (1 Peter 4:17)—causing GODLY JUSTICE to change the heart and mind of the one called by God from one that was ignorant in much, to one that UNDERSTANDS WHAT GOD EXPECTS and is reckoned as RIGHTEOUS in ALL so that one can be in HARMONY with GODLY RIGHTEOUSNESS for it is a “terrible thing to fall into the hands of the living God” (Hebrews 10:31).

This death and dying condition we all find ourselves in, is unnatural.

Have you ever come across a dying loved one who says they feel like they are twenty six years old yet they are in an eighty plus year old body?

People are caught in this trap they can’t escape from. Yet death today is inevitable. It was purchased by Jesus’ sacrifice but death will be overcome!

The hope that will be accomplished IS a resurrection from the death.

This will ultimately bring mankind back to God.

The hope that will be accomplished is a resurrection from the death.

“Weeping may endure for a night, but joy cometh in the morning” (Psalm 30:5).

ACTS 23:6 —HOPE & RESURRECTION. PART B. Will Mankind Resurrect With the Same Mind?
https://biblestudentsdaily.com/2016/11/05/acts-236-hope-resurrection-part-b-will-mankind-resurrect-with-the-same-mind/

*Note, the claim by the Naval Observatory for as soon as the first stars are seen differs with some Jewish commentators who claim 6:00 PM.

The mediatorial reign of Christ with the saints, shall bring righteousness and peace 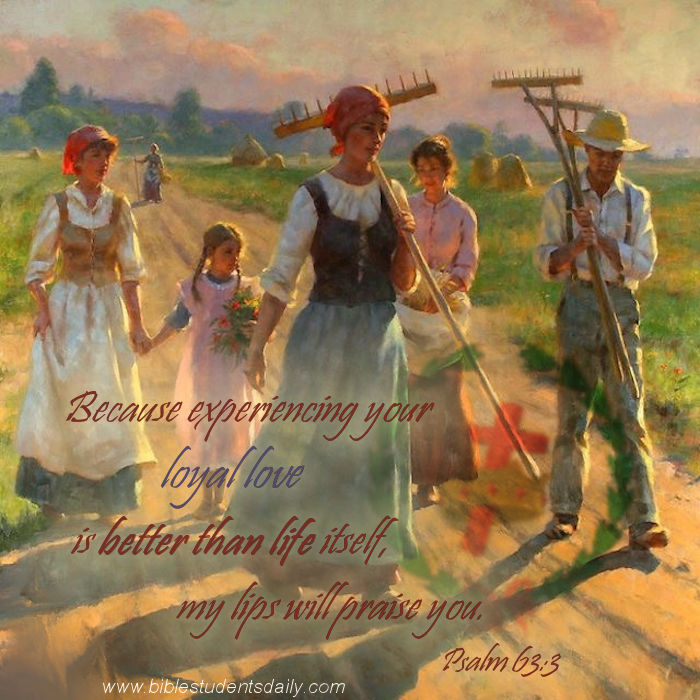 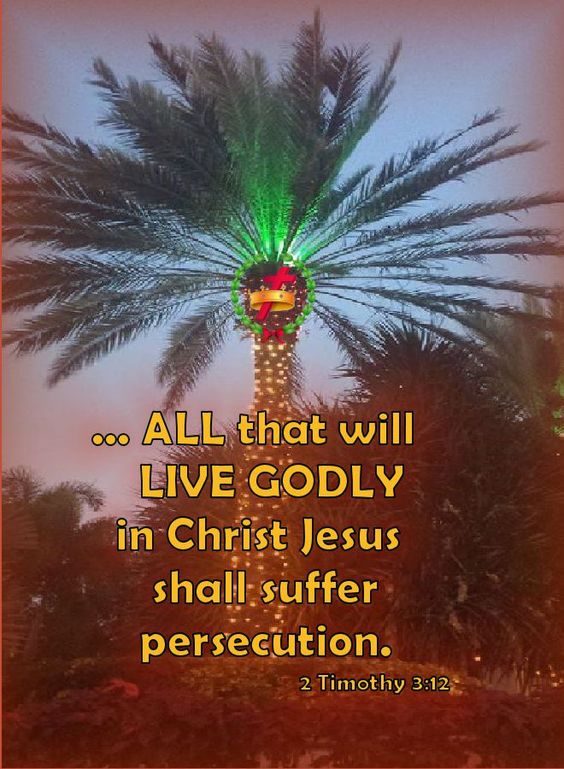 Nine-tenths of Jesus’ persecutions came from professors of religion. R374:3 Are we willing to bear the hatred and scorn, which loyalty to the truth brings? If so, we can go forth in his name, rejoicing as we go. R5441:6 If any man suffer as a Christian—for the truth’s sake, for righteousness’ sake—let him not be ashamed. (1 Pet. 4:16) R2782:1 An evidence of our faithfulness and sonship. R5544:3 Especially has this been true of these last days. R5773:3 The path to glory, honor, and immortality, in the footsteps of Jesus, is a very rugged one. R5465:6 If any of us is escaping persecution, he should feel fearful of his condition and make careful examination as to whether or not he is faithful to all the privileges and opportunities he can find. R4407:2, 5227:5; OV438:1*; Q740:4, 361:6 The Lord’s followers in the present time are called to suffer persecution for righteousness’ sake, not because it is either reasonable or proper, but because the Lord, wishing to test, prove, and polish his people, is willing to permit the evil. R4813:6, 2415:2 If we know that we are suffering for righteousness’ sake, then we know the spirit of God rests upon us. R5395:5, 5227:5 We are still in this time of persecution; the great Adversary is not yet bound. R2437:3 In proportion as he receives the truth and faithfully declares it. R1467:5 Those faithful to God during this age will have more hardship than have those who are unfaithful. R5294:5

“For you have died, and your life is hidden with Christ in God” (Colossians 3:3). 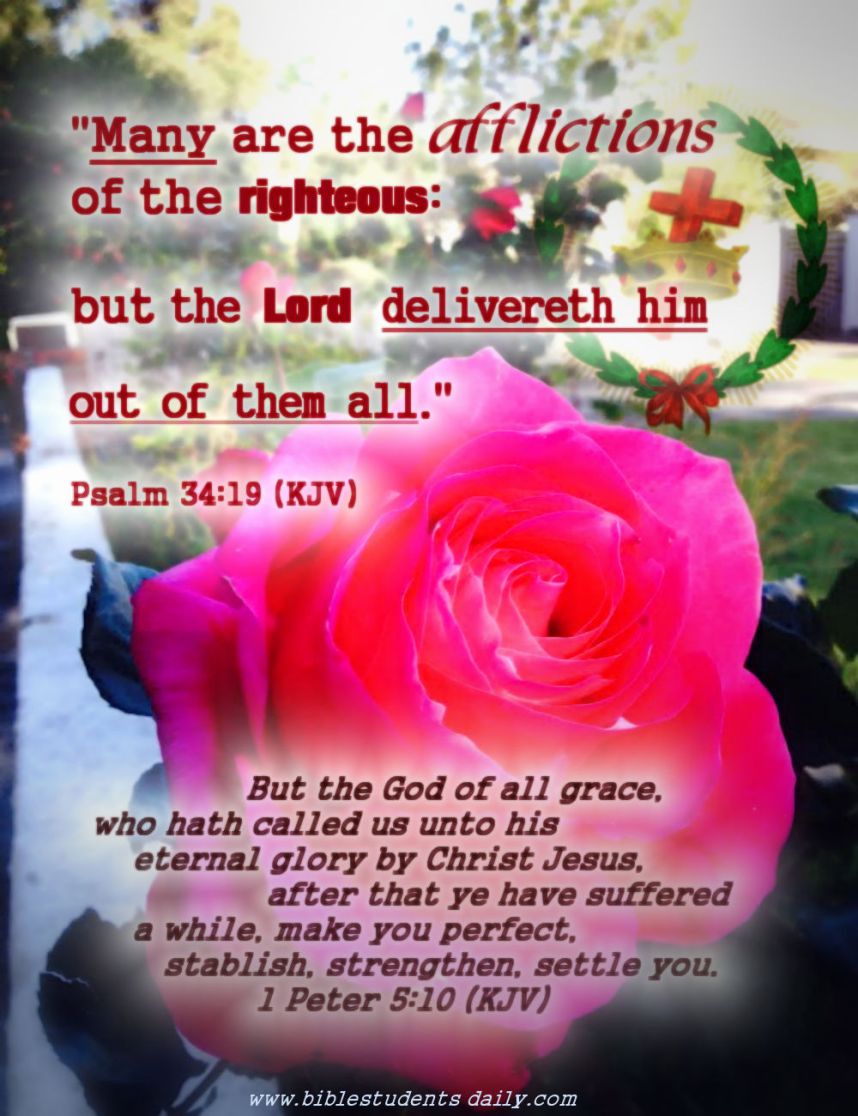 "The Lord wishes us to learn, not as children, certain fixed rules, but as philosophers the fixed principles which can be applied." - Bro. Charles T. Russell (R.4006) 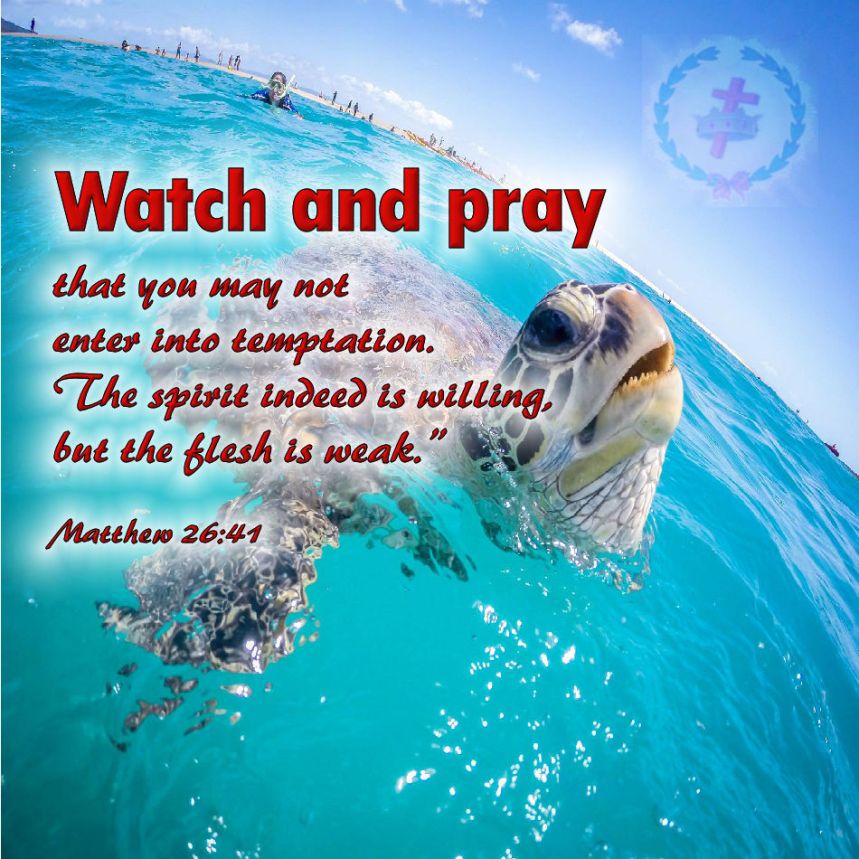 https://biblestudentsdaily.com/2016/05/25/victory-over-self/
Hebrews 12:1-2 Therefore, since we are surrounded by so great a cloud of witnesses, let us also lay aside every weight, and sin which clings so closely, and let us run with endurance the race that is set before us, 2 looking to Jesus, the founder and perfecter of our faith, who for the joy that was set before him endured the cross, despising the shame, and is seated at the right hand of the throne of God. 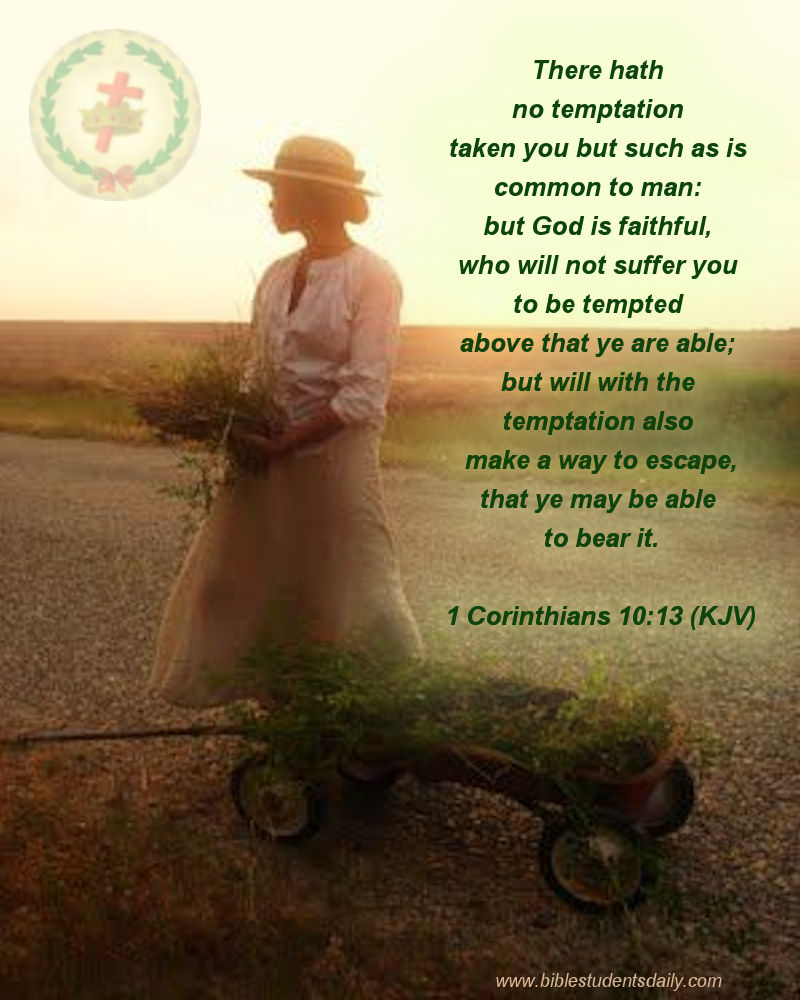 Close your eyes for a moment to …

the scenes of misery and woe, degradation and sorrow that yet prevail on account of sin, and picture before your mental vision the glory of the perfect earth.

Not a stain of sin mars the harmony and peace of a perfect society; not a bitter thought, not an unkind look or word; love, welling up from every heart, meets a kindred response in every other heart, and benevolence marks every act.

There sickness shall be no more; not an ache nor a pain, nor any evidence of decay-not even the fear of such things.

Think of all the pictures of comparative health and beauty of human form and feature that you have ever seen, and know that perfect humanity will be of still surpassing loveliness. The inward purity and mental and moral perfection will stamp and glorify every radiant countenance. Such will earth's society be; and weeping bereaved ones will have their tears all wiped away, when thus they realize the resurrection work complete. - Revelation 21:4

Aim to listen as if to the softest whisper from GOD – as if you are hypersensitive to sound – and then you will walk closely to GOD and follow GOD – it will lead to the springs of the most refreshing water of GODLY TRUTH for your thirsty flesh after that which is PERFECT and shall give you JOY forevermore!

"The Little Flock will serve the Lord with such Delight they will scarcely know how to cease their Efforts." - Charles T. Russell (R. 5413) 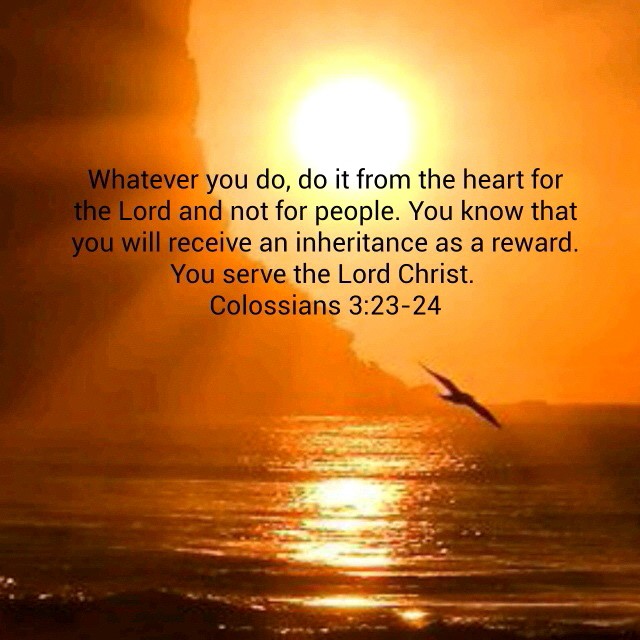 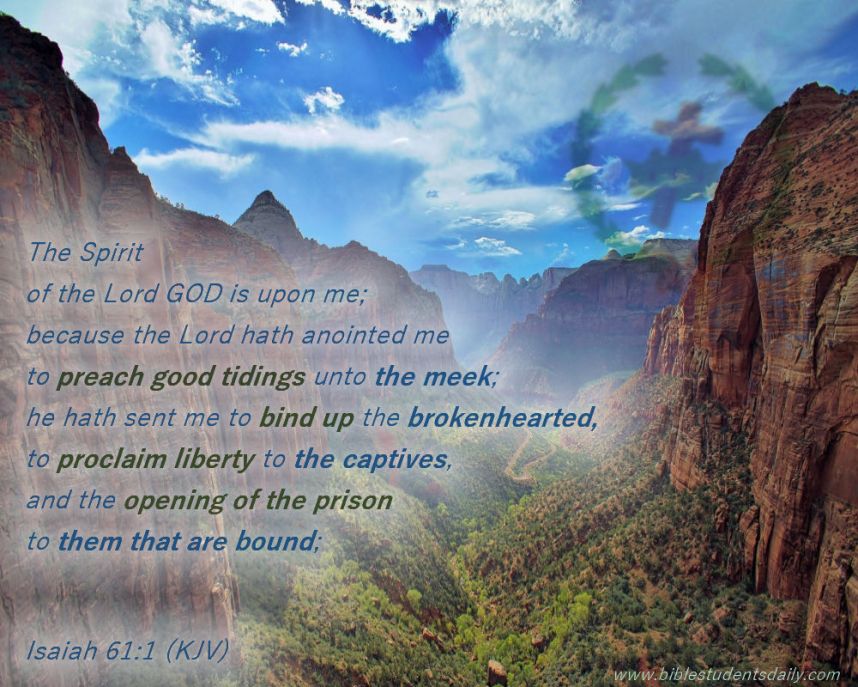 Let fearful saints fresh COURAGE take! The clouds ye so much dread, are big with MERCY, and shall break in blessing on your head...

Share with your children the WORDS of the BIBLE as often as you can! Lead them to CHRIST in any way you can. They are gifts from GOD and your gift is to present them to the Heavenly Father as pleasing offerings of your work to HIM through CHRIST. Spend every moment you can on their development while you are blessed to lead another to the living waters of LIFE. They will remember your works and bring the Heavenly Father JOY – as is this not our MOST GLORIOUS DESIRE of ALL DESIRES OF this existence — to BRING OUR HEAVENLY FATHER the greatest JOY that we are able as carnal beings, to strive to bring through our attempts to BE RIGHTEOUS like our Lord Jesus! May YAHWEH be praised for all HIS blessings! 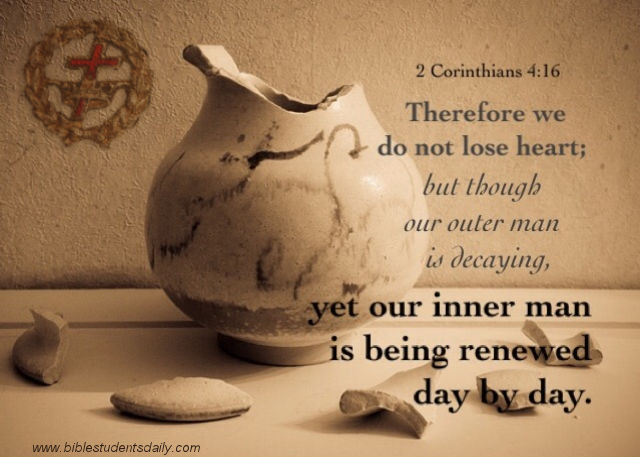 TRUST GOD FULLY by studying the Holy Bible and praying to the one who is PERFECT IN ALL and from whom comes PERFECT LOVE, JUSTICE, WISDOM and POWER!
"Each of us has his ‘day’ of service; it will soon be over. How important to fill it up rightly! " - Michael Nekora 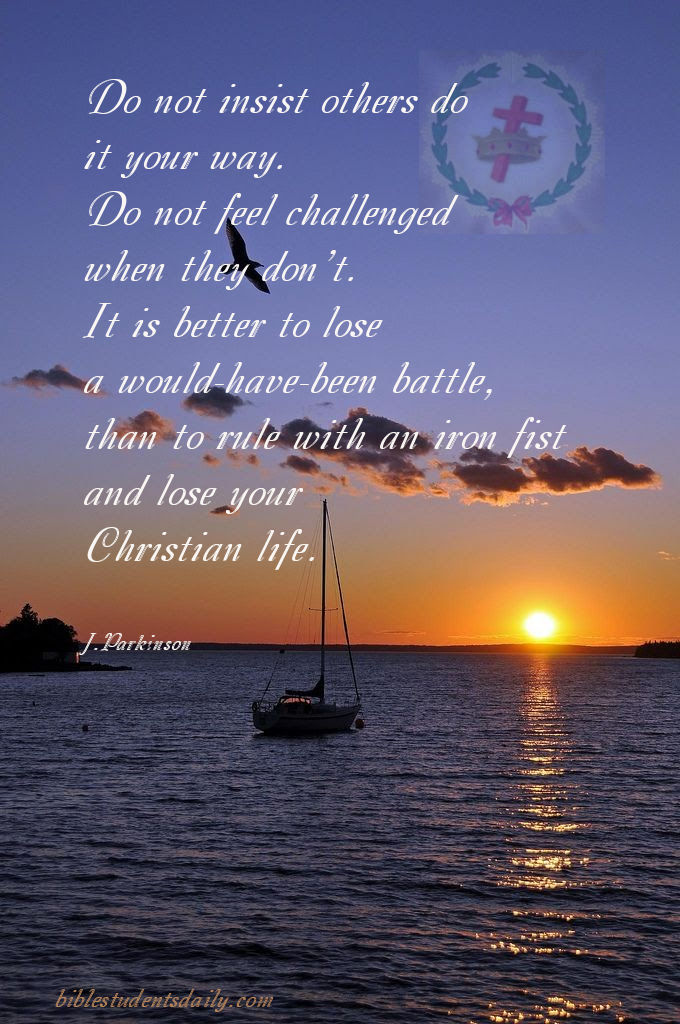 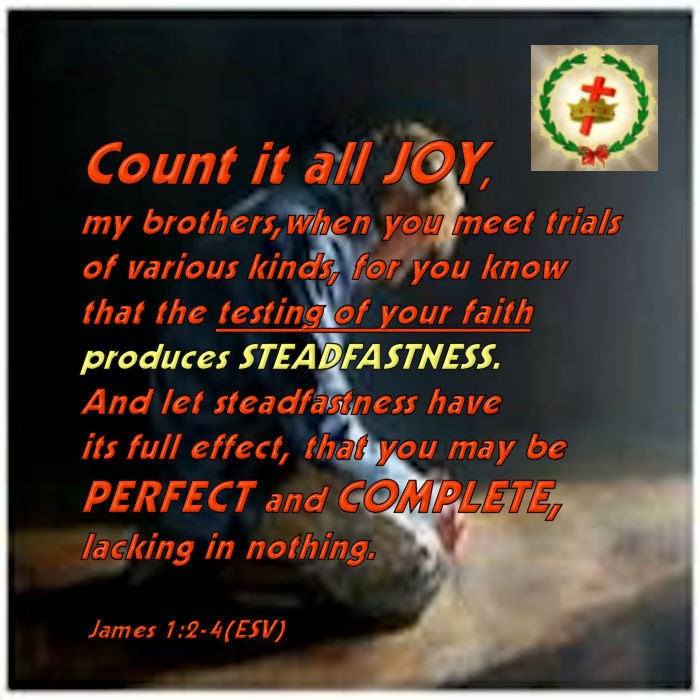 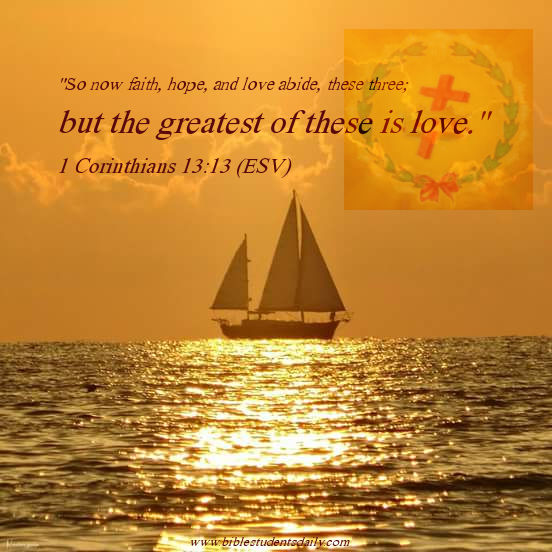 Repeat “I AM SO THANKFUL” – now say it over and over again praising GOD for every experience that shall work out for good to those who love GOD!

JESUS is the WORLD’s SAVIOR!

Our Heavenly Father has the perfect answer and a perfect plan so surrender YOUR WILL into GOD’s hands and wait patiently with cheerfulness patient endurance in the spirit watching and praying to our Heavenly Father through CHRIST while HE works out HIS perfect plan through the lives of those HE is preparing now to belong to HIS BELOVED FIRSTBORN SON – CHRIST JESUS… Seek the Father’s will in ALL YOU do as often as you can fixing your eyes on the author and perfecter of our FAITH. May GOD’s will BE DONE forevermore! 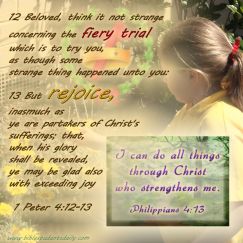 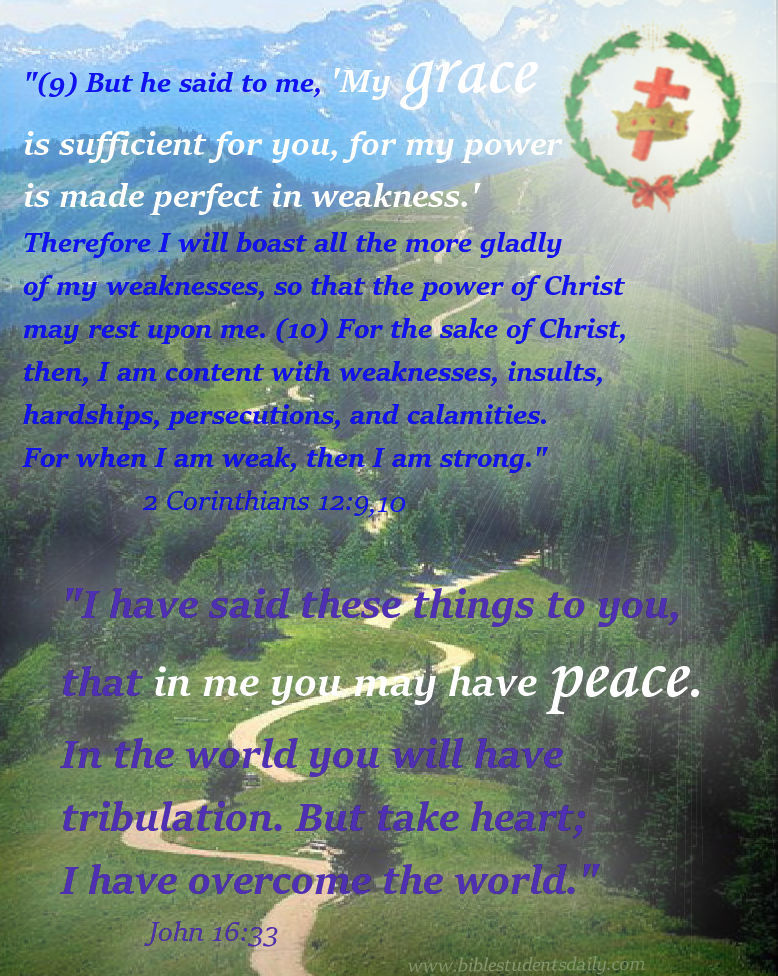 THIS IS MY WILL FOR THEE